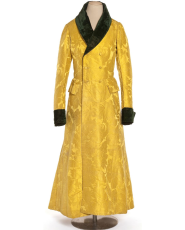 I had to work late tonight, our kitchen is a construction zone due to new countertops being installed, and I just didn’t feel like making an effort.  In my book, that’s what I call a trifecta: we were getting take out for dinner.

After picking up our Subway sandwiches, I mentioned to the kids how although I love Subway, I really wish that our small town offered more in the way of healthy food establishments.

“Yeah,” Mackenzie rolled her eyes.  “Instead of another dollar store.”

It is a bit of a joke with my husband at this point.  If he ever wants to get me on my soapbox about something, all he has to do is drive me past or make a comment about our new Dollar Tree that is being put in down the street.  There is nothing that infuriates me more.

It’s not that I have a problem with dollar stores, because I don’t.  I am quite the penny pincher and find their prices and vast selection, jam packed into that tiny store, exhilarating.  But, our town already has a dollar store.  We don’t need another dollar store.  We need a healthy fast food alternative to Subway.  Maybe even a not-so-healthy fast food alternative?  Or a decent sit down restaurant?  How about an ice cream shop?  A frozen yogurt?  Or, getting completely off of food, how about a public swimming pool?  A splash pad?  Paved running paths in the park? Additions to our bike trails?  More police officers on the pay roll?  My list can go on and on and on.  And, it usually does.

Recently, Kenzie has joined in my pitch and I can always count on my six-year old to back me up in my rantings.   Her ideas for “money better spent” are more her age-specific (think pet stores, candy stores, etc.), but I agree that they are all far better suggestions than a Dollar Tree.

This evening, however, James joined in on the conversation.

“Maybe I will mention it to the mayor.  I know him, you know?”

Forgetting that the mayor’s child is in the same daycare room as my son, I prodded. “Oh, yeah?  You know the mayor, do you?  What does he look like?”  There was no way he was going to get this answer right.  I had only seen the mayor in passing and even I wouldn’t be able to pick him out of a line-up.

I damned near wrecked my car.

“Yeah, when he comes to pick up his daughter.  Sometimes he has work clothes on and sometimes he looks like he just threw some clothes on after he got out of bed.”  Jameson blinked this cute little innocent, oh-so-confused look at me.

“Okay, okay,” I tried to sort the visions of our mayor in 19th Century, ornate dressing gowns out of my head.  I wouldn’t have been able to continue our conversation with a straight face if I hadn’t.  “But do you really mean a dressing gown, James?” I tried to put it in his perspective.  “Like, the dressing gowns that Harry, and Ron, and Professor Dumbledore all wear to sleep in.”

Jameson’s eyes twitched slightly and his cheeks turned that rosy-pink tinge that I have come to love when he realizes his literary faux pas.  “Oh.  Well… I guess our mayor doesn’t show up to daycare in a dressing gown.  More like, scrunchie clothes.”

“Alright, buddy,” I stopped him right there.  “Time to quit while you are ahead with this one.”

Hopefully I don’t run into our mayor anytime soon.  I might not be able to keep a straight face, envisioning him wearing a dressing gown and scrunchie socks!

One thought on “Our Mayor Wears a Dressing Gown”